We're new here. Queer news and culture. For everyone.
Oops! something went wrong. Please try again.
Woohoo!!! You're on the list!

Connecticut has passed a historic bill allowing transgender inmates to be housed in accordance with their gender identity in state prisons.

Earlier this month, Connecticut Gov. Dannel P. Molloy quietly signed into law Public Act 18-4, which is also known as the “Act Concerning the Fair Treatment of Incarcerated Persons.” The first-of-its kind law has been hailed by LGBTQ as “groundbreaking,” as well as one of the nation’s most progressive pieces of pro-trans legislation.

Among other things, Public Act 18-4 mandates that trans inmates be addressed in accordance with their gender identity—meaning that prison officials will refer to them in a manner consistent with their pronouns and the name they use in daily life. Thus, even if an inmate hasn’t had the ability to legally change their name or gender marker, staff members will respect their lived identities.

In addition, the law states that transgender prisoners have the right to purchase commissary items which match their gender identity. A trans woman, for example, would be able to buy lipstick or makeup.

The legislation also allows trans inmates to be searched by a guard who conforms to their same gender identity (e.g., a transgender man paired with a male officer) during intake or routine patrolling of the facility. This guideline is particularly relevant, as a significant portion of the 40 percent of trans inmates who are abused in U.S. prisons every year are targeted by guards.

Lastly, the provision around housing allows transgender people to be placed in accordance with their lived gender identity so long as they receive a diagnosis of gender dysphoria or have legally changed their gender marker.

Upon approving the bill, Malloy said its signage illustrates that “all people deserve to be treated with dignity, empathy, and respect.”

“[I]ncarcerated women are no exception,” the Democrat claimed in a May 14 statement. “Incarcerated women face unique challenges and barriers to success—a consideration that should be reflected in our statutes.

“These policies are part of our ongoing efforts in Connecticut to ensure that we are making strides that reduce recidivism, that end the cycle of crime and poverty, that continue to drive crime down even lower, and that ultimately results in permanent improvement and reformation instead of permanent punishment,” he continued. “We are working every day to fix the haunting legacy of mass incarceration, and this is another sensible step in the right direction.”

The passage of Public Act 18-4 makes Connecticut the only state with sweeping guidelines affirming the dignity and safety of trans prisoners on the books, although cities like San Francisco have passed their own regulations.

A similar law, State Bill 990, is currently being debated in the California legislature. Authored by State Sen. Scott Wiener, The Dignity and Opportunity Act would compel prison officials to refer to trans inmates in a manner consistent with their identity and would give transgender people the right to access programming even when placed in Solitary Housing Units (SHU), often known as solitary confinement.

Trans prisoners are often placed in administrative segregation purportedly for their own safety, and SB 990 ensures these individuals still have the ability to attend drug rehabilitation programs or job training.

After passing out of committee on May 25, the legislation had its third hearing in California Assembly on Tuesday.

These moves may seem like small steps in the right direction given that trans prisoners are 13 times more likely than their cisgender peers to be abused or assaulted in lockup facilities. But advocates say these protections are increasingly crucial after the Trump administration announced it would rollback federal guidelines on gender-affirming placement for trans prisoners.

On May 12, the Bureau of Prisons (BOP) released an updated Transgender Offender Manualstating that authorities “will use biological sex” as the main consideration when determining housing for transgender inmates.

The manual claims that only “in rare cases” will a prisoner be placed in a manner consistent with their “identified gender.”

That decision effectively reverses Obama-era policy advising prisons to determine the placement of trans inmates on a “case-by-case basis.” Introduced in 2012, the previous guidelines instructed wardens and prison staffers to make determinations based on the “inmate’s health and safety” and “whether the placement would present management or security problems.”

Connecticut’s guidelines—which are set to take effect July 1—appear to take a page from the Obama regulations. Public Act 18-4 states that trans inmates will only be placed in a manner which breaks with their gender identity if such housing poses a safety risk to other prisoners housed in the facility.

The law was introduced after a transgender teenager was placed in an adult prison because officials couldn’t figure out the appropriate situation for her.

Solving these crises is exactly why ACLU of Connecticut Executive Director David McGuire claimed the law’s passage is a “really big deal.” McGuire told the Associated Press that Public Act 18-4 is “the most protective transgender policy and law in the country.”

Mike Lawlor, the governor’s undersecretary for criminal justice policy and planning, affirmed all housing determinations will be made through careful consultation.

“I’m sure there will be people who will say, ‘So how does this work?’” Lawlor told the AP in an interview. “If you are a guy, do you just say you’re a woman and you get to go to a woman’s prison? No. There is a very elaborate analysis, psychological and otherwise.”

Although it’s unknown how many transgender prisoners are housed in Connecticut, 2012 estimates show there are 3,200 trans inmates in the United States.

The queer ensemble known as Fever Ray descended upon Los Angeles over the weekend to deliver a high femme performance led by Karin Dreijer.

Outside the Hollywood Palladium hangs a note with a request: “Kindly leave your phones & cameras in your pockets. Share this moment with us. Tall people please stand back and give space to the shorter ones. Women to the front. Love, Fever Ray.”

Fever Ray frontwoman Dreijer, 43, is half of the now-defunct Swedish experimental duo The Knife. The sounds of The Knife evoke nostalgia for a simpler time when I harbored an unawakened affinity for queerness without yet identifying as queer.

Since then, and since the pair split, Dreijer has masterfully expanded on her influential legacy with Fever Ray. It’s a legacy attested by the idyllic passion found in the audience at this live show: one look around and it’s clear that Karin is a conduit for queer women and men alike. 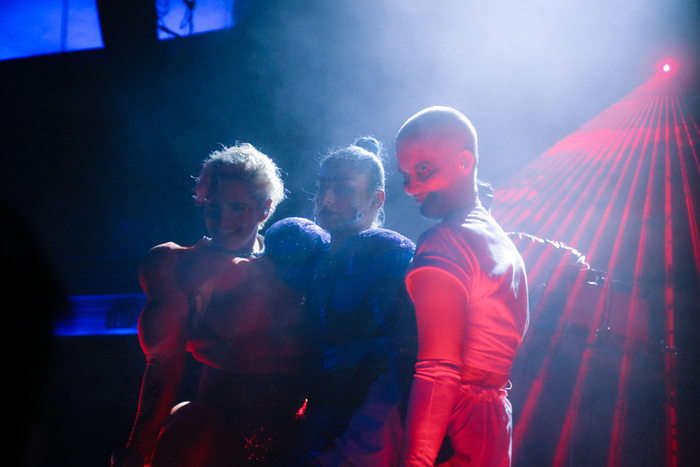 Dreijer has a longstanding disruptive feminist agenda that culminated with Plunge, her second album as Fever Ray. With Bunny Michael as her opening act, and a number of WOC joining Fever Ray when she took the stage, Karin is an exemplar of how to generously share the platform you’ve earned with identities more complex than your own.

“There were a lot of straight men who loved the first (Fever Ray) album, and then I noticed they don’t like this one,” she told the magazine. “I’m very happy about that.”